Is A Top Art School Worth It? 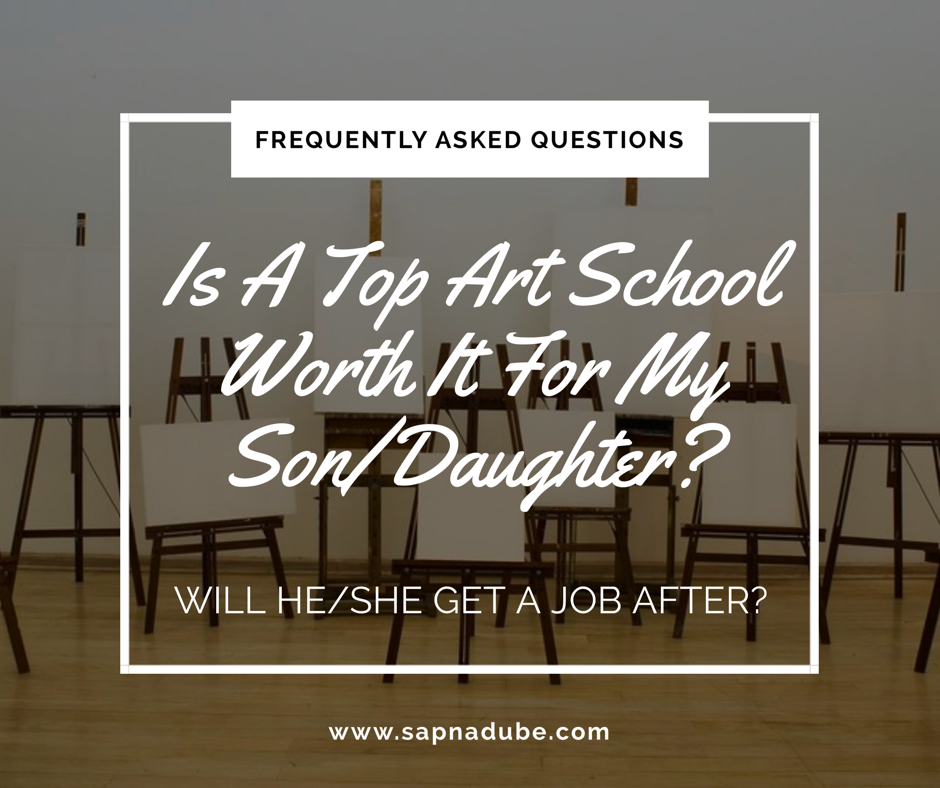 Making art is hard. Making it as an artist is even harder. We can’t all grow up as precocious prodigies who know how to mix colours by the age of eight and have gallery representation and a spread in Art India at 16. Some of us actually have to go to art school (or teach ourselves).

Should I send my son/daughter to a top art school? How much will it cost and will he/she be employed after graduation?

Now, there are no extensive studies available on artists in India. However, there is a recent comprehensive report of working artists in the United States and the findings can be applied loosely in the Indian context too.

According to the report, of the 2 million arts graduates in the United States, only 10% make their primary earnings as working artists. Of the 1.4 million working artists in the United States only 16% have an arts-related bachelor’s degree. The US department of education data also shows that 7 of the top 10 most expensive schools (after scholarships and aid) in the country are art schools and art graduates’ debt loads are higher than non-arts graduates, making risk taking and innovation after graduation more difficult, if not impossible. The majority of working artists have a median income of $30,261 while the overall median income in the United States is at $59,039. The money income threshold in 2010 to determine poverty was $22,162.

It’s very important to understand your child, what he/she wishes to with his/her life. But all in all, artists are not employed by anyone. There are those who work for animation/film-making studios, ad agencies and at Adobe and such. However, most artists work on their own. They are not employees. Their lives are by definition, economically unstable. The starving artist is a real person.

According to Wikipedia, A starving artist is an artist who sacrifices material well-being in order to focus on their artwork. They typically live on minimum expenses, either for a lack of business or because all their disposable income goes toward art projects.

Some starving artists desire mainstream success but have difficulty due to high barriers to entry in fields such as the visual arts, the film industry, and theatre. These artists frequently take temporary positions such as teaching or other service industry jobs while they focus their attention on “breaking through” in their preferred field.

Other artists may find enough satisfaction in living as artists to choose voluntary poverty regardless of their prospects for future financial reward or broad recognition.

Not long ago, art in India was relegated to the hallowed portals of the elite and royalty. This was the time when cultured kings offered royal patronage to artists from varied fields of art.  The patronage of the maharajas of Travancore, Baroda, and Mysore allowed Raja Ravi Varma to become the most iconic of India’s painters.

The days of kings, wealthy people and Popes sponsoring artists are long over. Here is what makes it possible for an artist to succeed: total determination and focus coupled with skill and creativity. And it is determination that is primary. Everyone dreams of becoming a ‘great artist’ but like Picasso said, “Action is the foundational key to all success.” And it’s important to define what success means to an artist early on too.

If your son or daughter is not absolutely determined to have a career as an artist, consumed by that vision, then go spend your money on law school, medical school, an MBA or a degree in computer science or something equally stable. Not art.

And after seeing these statistics, you still want to pursue art then Hey…good for you! Wise decision!. It’s not an easy car ride and it’s off the trodden path, and you have to be willing to make some sacrifices and some important decisions. You have to ask yourself, Is my art important enough for me to pursue it seriously? One of the things I always tell myself and other young artists is that they shouldn’t let people turn their art into a commodity. There’s a concept that artists have to sell a lot, and there’s a lot of desire on the part of young artists to get gallery representation. Once they do, they often find themselves making the same thing over and over again…so…don’t let your work become a commodity!

For all the philosophy behind it, the stories of artists struggling in garrets, the disdain “true” artists are said to have for money, there has never been art without patronage. Except for his inclusion in the court of Lorenzo ‘the Magnificent’ de’ Medici, Duke of 15th century Florence, Alessandro Botticelli might have never painted The Birth of Venus. Without Pope Julius II, Michelangelo would never have created the ceiling of the Sistine Chapel. The patronage of the maharajahs of Travancore, Baroda, and Mysore allowed Raja Ravi Varma to become the most iconic of India’s painters.

Today, large companies have replaced royalty in the bankrolling of art. There’s Deutsche Bank, which is said to have at least as many works of art as the Louvre. J.P. Morgan has an art programme, through which it buys art and supports artists. The Guggenheim family is forever associated with the eponymous museum in Manhattan, which was founded by Solomon Guggenheim in 1939 to give the public access to his collection, though their fortunes came originally from mining. It’s a trend that’s catching on in India: Tina Ambani’s Harmony Art Foundation invested in works by Francis Newton Souza and Sunil Das, for Anil Ambani’s headquarters in Mumbai’s Ballard Estate; Malvinder Singh of Religare bought an Arpita Singh mural for close to Rs 10 crore; Rajshree Pathy of Rajshree Sugar plans to set up a private art museum in Coimbatore; and, of course, Kiran Nadar, wife of tech billionaire Shiv Nadar of HCL Technologies, has invested between $200 million (Rs 1,085.8 crore) and $250 million on Indian artists (see Nadar’s effect on the Indian art market in “The Valuer of Indian Art”).

Global recognition for Indian artists has often occurred despite the lack of an Indian market. In 2005, Bernard Arnault, owner of LVMH Louis Vuitton Moët Hennessy, bought a Subodh Gupta piece for Rs 49 lakh ($90,000) and in 2006, Francois Pinault, boss of PPR, spent an estimated $1.5 million on another. But it was only after Nadar bought his work at a hitherto unheard of sum that Gupta’s worth rose in India.

While we are on the subject, don’t miss watching ‘Velvet Buzzsaw’ on Netflix. It’s a never-before tried genre that let’s us take a nice little peek at the goings on of the art world. I absolutely loved the fashionable, gutsy ladies in the movie and Jake Gyllenhall, playing an art critic aces it as usual. Must Watch!!