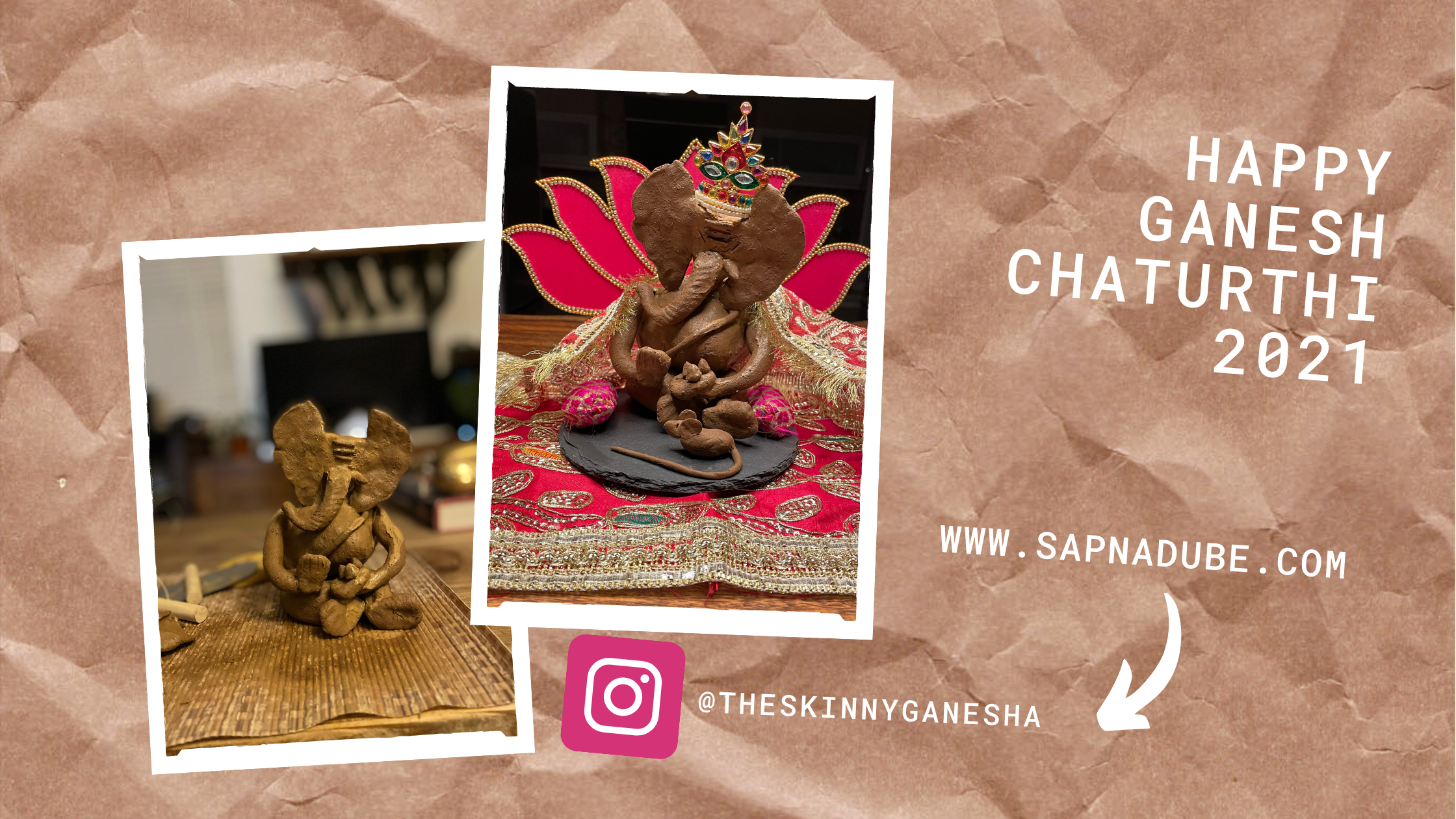 “Lord Ganesh of curved elephant trunk and huge body,
Whose brilliance is equal to billions of suns in intensity,
Always removes all obstacles from my endeavours truly,
I respectfully pray to him with all my revered sincerity.”

This is the second year of making our own Ganesha, last year I used flour and turmeric, this year I have used clay. I chose ready kneaded terracotta clay that’s easily available on Amazon or Itsy Bitsy, the craft store. This is hands down the most fantastic, engaging the whole family, personable, eco-friendly alternative to purchasing Ganesha idols made from materials that may cause water pollution during Visarjan. I definitely feel more connected to the festivities this way.

If you are worried about how to accomplish this task, don’t stress too much. Last year, I used reference pictures but this year I just created on my own. It may not be the most artistic, well-finished idol and I would have preferred if the trunk was turning left instead of right. But hey – it’s ok. Everything doesn’t have to be perfect. Apparently the Balmuri Ganesha or right-trunked Ganesha is a harder to please form of the deity compared to the left turned trunk form. So I’ll have to appease the lord with a lot more sweet treats than last year I guess. Given that he doesn’t really eat any of the offerings – I guess my family and I are gonna have a super super sweet Ganesh Chaturthi. I wish you all the same.

Why Making Your Own Ganesha Ties To His Actual Origins
Ganesha is the son of Shiva and Parvati and he is the brother of Karthikeya (or Subrahmanya), the god of war. He was created by his mother using earth which she moulded into the shape of a boy. As Shiva was away on his meditative wanderings, Parvati set her new son as guard while she bathed. Unexpectedly, Shiva returned home and, on finding the boy, and outraged at his impudence in claiming he was Parvati’s son, Shiva called for his gang of demons, the bhutaganas, who fought ferociously with the boy. However, the youngster easily held his own against such fearsome adversaries and Vishnu was forced to intervene in the form of Maya and, whilst the boy was distracted by her beauty, the demons, or Shiva himself, lopped off his head. At the commotion, Parvati ran from her bath and remonstrated with Shiva for so summarily killing their son. Repentant, Shiva ordered a new head to be found for the boy and, as the first animal available was an elephant, so Ganesha gained a new elephant head and became the most distinctive of the Hindu gods. As a reward for his great courage in fighting the demons, Shiva made Ganesha the leader of the bhutaganas, hence his name.