Do You Have These 5 Millennial Traits? 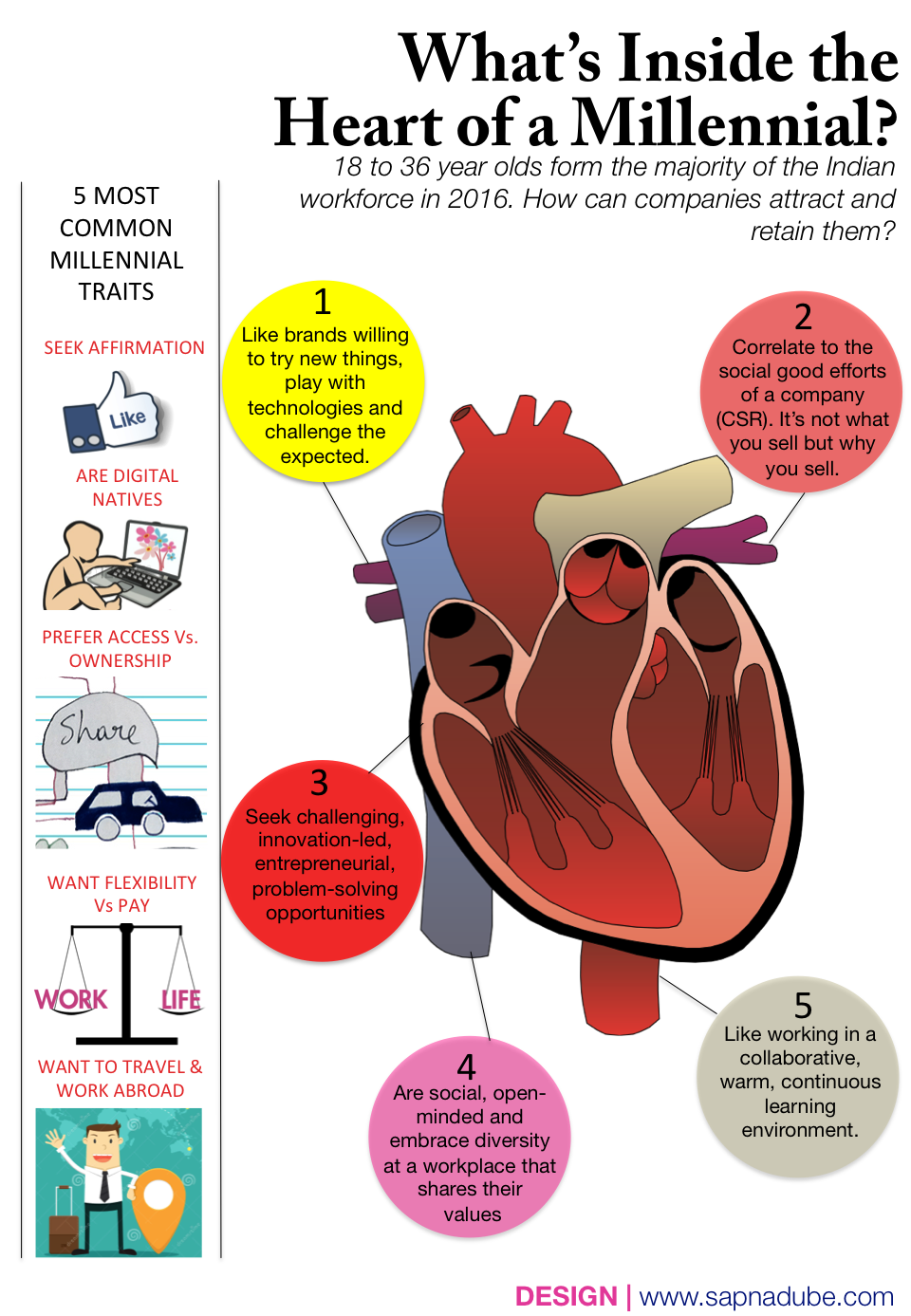 I’m a millennial at heart. I love personalized appreciation and constant and instant recognition for what I do, even if it means one line from the CEO. I need to feel valued. I want flexibility in how I work and don’t like answering 101 questions for simple work-from-home permissions.

Classic millennials are defined roughly as those born between early 1980s and the early 2000s, and for whom digital is a way of life. Given that India will become the youngest country by 2021, with 64% of its population in the working age group of 20-35, according to the 2013-14 Economic Survey, companies need to shape their strategies to remain relevant to this section, called millennial or Generation Y. At information technology consulting company Infosys, 90% of its 180,000-strong global workforce consists of millennials.

The Starting of a Brand New Way

Today, organizations have to rethink their approach. Even till the early 2000s, the biggest difference from one generation to the other was just the age. But my generation is radically different, as it is an always-connected generation. And companies need to respond to this change fast. Companies like Accenture, Infosys, IBM and Microsoft, where millennial talent is a significant part of the workforce, are implementing initiatives in India to attract, retain and engage this group.

Infosys recently relaxed their office dress code and other companies are convening councils of millennial employees to crowd-source ideas and weigh in on everything from marketing campaigns to workplace policies.

Millennials expect a technology-enabled workplace that promotes a collaborative, transparent and participative organization culture and innovation, and rewards individual contribution. They have high expectations for advancement, salary and for a coaching relationship with their manager.

American sociologist Kathleen Shaputis labeled Millennials as the Boomerang Generation or Peter Pan generation, because of the members perceived tendency for delaying some rites of passage into adulthood for longer periods than most generations before them. In prior generations, people got married and started a career and they did that immediately. What young people today are seeing is that approach has led to divorces, to people unhappy with their careers …The majority want to get married but they just want to do it right the first time, the same thing with their careers.

According to a cross-generational study comparing Millennials to Generation X conducted at Wharton School of Business, more than half of Millennial undergraduates surveyed do not plan to have children. The researchers compared surveys of the Wharton graduating class of 1992 and 2012. In 1992, 78% of women planned to eventually have children dropping to 42% in 2012. The results were similar for male students.

An Army of Agnostics, Atheists, Spiritualists and Darwinists

Millennials are the least likely to be religious. A poll also found 41% of millennials thought religion is ‘the cause of evil’ in the world more often than good. The Internet generation atheists are not atheists because of dialectical Marxism or a belief that ‘religion is the opium of the masses’. Instead, they are identifying with sceptics and rationalists not just in India but across nations and cultures, thanks to the Internet and global connectivity. It’s the Internet, again, that gives access to today’s atheists to a trove of videos, literature and American stand-up comics espousing atheism. There is a new wave of youth culture – which was not present when the older generation was younger.

They use technology at higher rates than people from other generations. It was found that 97% owned a computer and 94% owned a mobile phone.

Other findings in the Junco and Mastrodicasa survey revealed 76% used instant messaging, 92% of those reported multitasking while instant messaging, 40% of them used television to get most of their news, and 34% of those surveyed used the Internet as their primary news source.

Millennials were the first to grow up with computers in their homes. Many Millennials enjoy a 250+-channel home cable TV universe. One of the more popular forms of media use by Millienials is social networking, to create a different sense of belonging, make acquaintances, and to remain connected with friends.

Millennials in abundance have asserted the ideal that all their heritages should be respected, counted, and acknowledged. They are more open-minded than their parents on controversial topics like same-sex marriage.

A 2013 Pew Research Poll concluded that 84% of Millennials, born since 1980 and then between the ages of 18 and 32, favor legalizing the use of marijuana.

Overwhelmingly and unanimously, diversity was defined by Millennials as cultural diversity, which includes traits such as personality, work styles, LGBT, accents, personality and religion. The visible diversity traits of age, gender, and ethnicity are also included in their definition of diversity, but are of less significance. Millennials view diversity as a representation of fairness and protection to all. They value leadership that is transparent, communicative, and engaging.

Have you experienced generation gap at the workplace? Do you often break office rules to access social media? What is your idea of an ideal workplace? I want to hear.